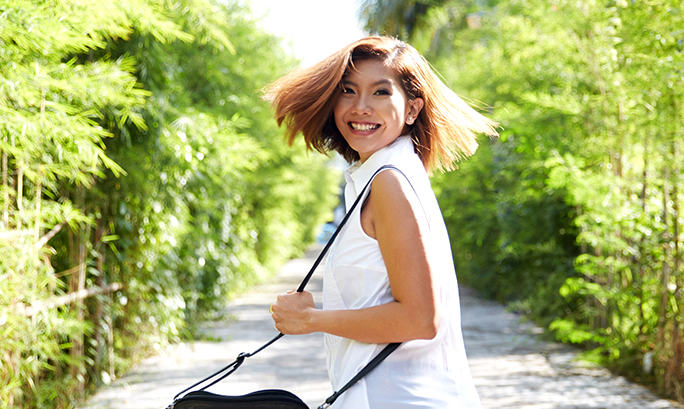 As well as working with Oriflame, you’re also a flight attendant – when did you start?
I started working for a local Indonesian airline in 2008 when I was only 18-years-old – it was my childhood ambition! In 2011 I joined the airline Air Asia and requested to be based in Bali so I could be near my family – being close to family is the best thing in life!

You must travel a lot - what’s been your favourite trip ever?
My favourite trip was when I went to London for the Gold Conference in 2015; it was only five months after my wedding so it felt like a free honeymoon sponsored by Oriflame! I really enjoyed being in London, and I’m still amazed by how Oriflame manages to create such a fantastic, VIP experience.

“It’s an easy way to start a business without needing much money to begin with...”

What does a typical Oriflame conference look like?
Everything Oriflame says about their conferences is true! Whether it’s Gold or Diamond, it’s like a dream conference because Oriflame chooses the most desirable destinations that many people haven’t been to; for example, for us Indonesians, going to London isn’t easy. Even if you have a lot of money, it’s still difficult to get a visa. But with Oriflame, when I went to Jakarta to apply for my visa, all I had to do was say one word: “Oriflame,” and they said “OK!” It was so easy.

Oriflame arranged everything for us. In the Master class sessions, we learned how to grow our business, faster and better. And in the Recognition Awards and Gala Dinners, we received motivation and inspiration from those leaders who began their businesses from nothing and are now successful. I’ve honestly learned from so many people from around the world!

How did you discover Oriflame? Was it the idea of travel that first drew you in?
My husband is the best of friends with Niek Made Sugiarti and Nyoman Suryananta (who are in the Top 15 in Indonesia). When I met Ni, I remember her saying to me, “You love makeup; have you heard of Oriflame?” I hadn’t.

She told me how with Oriflame you could travel the world and even visit Europe twice a year. I said to my husband: “I’m going to take this opportunity – if she can, then so can I!” Five months after I joined, I became a Senior Manager; within the first year, I received three new titles.

And in less than three years you’re now at Diamond Director level!
It’s because of all of the support that Oriflame has given me; it’s an easy way to start a business without needing much money to begin with. As long as you want to learn, you can do it!

Do you use social media and online tools to reach new customers?
Because I work as a flight attendant, I run 80% of my business online and spend the rest of my time offline, connecting through beauty classes, meeting with my team and distributing flyers; I do all of this on my time off.

Wow, 50 people! Do you feel like you’ve helped others to change their lives?
No, but I do feel that Oriflame has changed my life and my dreams. Instead of serving people for the rest of my life, Oriflame has taught me that I deserve better – that I can earn money without being away from my family. Oriflame has done so many wonderful things for my life!

My Life, My Style

Watch now
My Life, My Style

Read now
My Life, My Style

Bottling the Smell of Magic